Currently, the Delhi Capitals (DC) are facing the Royal Challengers Bangalore (RCB) at the Feroz Shah Kotla Stadium in Delhi in the 46th match of the ongoing season of the Indian Premier League (IPL). After winning the toss, the DC skipper, Shreyas Iyer decided to bat first and his decision paid well as they scored 59 runs in the powerplay itself.

Delhi has got off to a decent start with Shikhar Dhawan and Prithvi Shaw scoring 35 runs for the opening wicket before the latter getting out in the fourth over of Umesh Yadav. After dismissal, Iyer along with Dhawan started building a partnership and they scored 68 runs for the second wicket before the latter throwing his wicket away to Yuzvendra Chahal in the 13th over.

WATCH – Saini Got Smashed By Rutherford In The Final Over

Rishabh Pant came out to bat next and he failed to do much as he was dismissed in Chahal’s next over. Even, Iyer was also dismissed in the very next over of Washington Sundar. Colin Ingram was batting at the crease with Sherfane Rutherford in the 17th over and on the fifth ball of the over, Saini dismissed Ingram. Meanwhile, the Capitals posted a daunting 187, thanks to fifties by Iyer and Dhawan and some late fireworks by Rutherford and Axar Patel in the last few overs as they added 46 runs for the 6th wicket in just 19 balls.

During the chase, the RCB started on fire as Parthiv Patel and Virat Kohli added as many as 63 runs for the opening wicket before Patel getting out in the 6th over of Kagiso Rabada. AB de Villiers came out to bat next but he failed to make a partnership with Virat Kohli as the latter got out in the 8th over of Axar. However, along with the Shivam Dube, De Villiers added 35 runs for the third wicket before getting out in the 12th over of Rutherford owing to a brilliant running catch by Patel at the mid-wicket boundary. 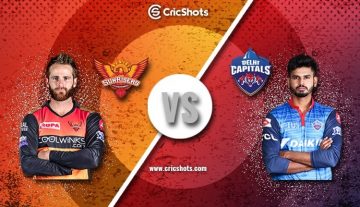