Former Indian skipper, Rahul Dravid is celebrating his 47th birthday on Saturday and the wished started pouring in from all parts of the globe for the legendary batsman. The Board of Control for Cricket in India (BCCI) shared a video of Dravid’s special knock against New Zealand when he attained his highest ODI score of 153 in Hyderabad on November 8, 1999.

Former teammates like VVS Laxman, Harbhajan Singh and well-known commentator Harsha Bhogle too tweeted along with numerous other fans, wishing the batting maestro on his 47th birthday. The BCCI revisited Dravid’s most memorable ODI knock where he along with Sachin Tendulkar smashed the New Zealand bowling attack to all parts of Hyderabad as India amassed a mammoth 376 for two.

Dravid was dismissed for 153 — his highest ODI score and the only 150-plus score in ODIs — while Sachin Tendulkar remained unbeaten on 186. The duo added as many as 331 runs for the second wicket after Sourav Ganguly was run out in the second over. New Zealand were bowled out for a paltry 202 in 33.1 overs as India registered a massive 174-run win.

Here is the video shared by the BCCI:

Wishing The Wall – Rahul Dravid a very Happy Birthday. His exploits in Test cricket are well known but we thought we would relive one of his knocks in ODIs against New Zealand.
#HappyBirthdayRahulDravid 🎂🎂 pic.twitter.com/psUsTPw8Xt

Dravid’s middle-order partner VVS Laxman posted a picture of the duo to wish his “good friend” while Harbhajan dubbed him a “legend”.

Wishing my good friend Rahul Dravid a very special birthday and a wonderful year filled with love,happiness and prosperity. pic.twitter.com/0zx7cmi5S1

Here are some more birthday wishes for Rahul Dravid. 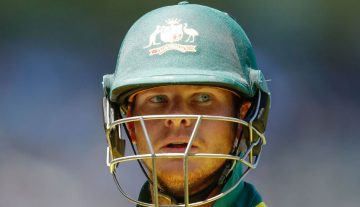 Article
By CricShots - Jun 2, 2018
Steve Smith Turns 29, ICC Wishes Him on His Birthday