During the toss, the CSK skipper, MS Dhoni said that they have made three changes in their squad as Dhoni, Faf du Plessis, and Ravindra Jadeja came back in to replace, Dhruv Shorey, Micthell Santner, and Murali Vijay. On the other hand, DC also made three changes as Ishant Sharma, Kagiso Rabada, and Sandeep Lamichhane made way for Chris Morris, J Suchith, and Trent Boult.

In the fourth over of Suchith, after Watson dismissal, Suresh Raina came out to bat and Rishabha Pant gave him an unusual welcome as he didn’t let Raina go towards the crease and blocked his way in a fun way. After the early dismissal of Watson, Du Plessis and Raina added as many as 83 runs for the second wicket before the former got out in the 14th over of Axar Patel. However, they only managed to score 27 runs in the powerplay.

Soon after Faf’ wicket, Raina got out in the 15th over of J Suchith owing to a brilliant catch by Shikhar Dhawan. After his dismissal, Dhoni started building a partnership with Ravindra Jadeja as they as added 43 runs for the 4th wicket before the latter getting out in the 19th over of Chris Morris. Jadeja got with the brilliance of Morris, who ran to his left and holds on at midwicket with a slide to keep his balance as the ball went quite high. 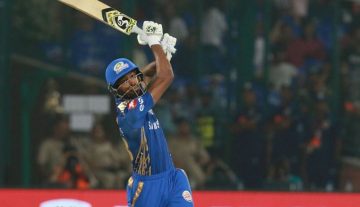 Article
By Shruti - May 6, 2019
Hardik Pandya gets backing after being referred to abusive words