It was not only with the bat, but also Shreyas Iyer dominated with his brilliant fielding in the Vizag ODI. He was on the receiving end in the first ODI at Chennai when he dropped a sitter at long-off; however, it was payback time for him in the second ODI at Visakhapatnam. His brilliant fielding effort near the boundary line helped India to get a big fish in the name of Shimron Hetmyer.

It was in the 14th over of the match when Hetmyer knocked Ravindra Jadeja to the mid-wicket fence. Though it looked like a boundary, Iyer chased it brilliantly to bring the ball back in the play. As soon as he saved a certain boundary with a dive, he recovered quickly to throw the ball back into the hands of Jadeja at the bowler end.

As usual, Jadeja wasted no time in knocking out the bails to get Shimron Hetmyer short of his crease. The celebrations from the Indian team followed by the dismissal proved how badly they required the wicket of Hetmyer. The wicket of the southpaw was quickly followed by Roston Chase, who got no answers to the quality spin of Jadeja.

Coming to the match progress, initially, it was Kieron Pollard, who won the toss, asked Virat Kohli and his men to bat first. Accepting the challenge, the Indian openers,  Rohit Sharma and KL Rahul showed their class by adding 227 runs in almost 38 overs.

After the departure of Rahul and Rohit, Virat Kohli was dismissed on golden duck by Kieron Pollard. However, two young stalwarts of Team India- Shreyas Iyer and Rishabh Pant added 73 runs for the 4th wicket in just 25 balls. Sheldon Cottrell was the pick of West Indies bowling attack as he scalped two wickets but conceded 83 runs in his nine overs. With impressive batting performances, Virat Kohli and his already have laid the foundation of a win as no team has chased down a mammoth total of 387 on the Indian soil.

In reply, Evin Lewis and Shai Hope started things well for the team. However, Shardul Thakur gave the breakthrough by dismissing Evin Lewis in the 11th over. Despite the wickets of Evin Lewis and Hetmyer, Shai Hope and Nicholas Pooran are fighting hard for the victory. 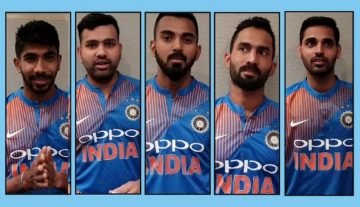 Videos
By CricShots - Nov 29, 2018
WATCH – Indian Players Reveal Secrets About Each Other