On Friday, the Indian skipper, Virat Kohli came out with a spectacular run out to get rid of New Zealand opener Colin Munro during the fourth T20I of the five-match series at the Sky Stadium in Wellington. The dismissal helped India break the crucial 74-run partnership for the second wicket.

In the 12th over of New Zealand’s innings, Munro smashed the widish ball from Shivam Dube to sweeper cover. Shardul Thakur collected the ball in the deep and threw it down to Kohli at cover, who wasted no time threw the ball back and affected a direct hit at the stumps to dismiss Munro, who was on his way back to complete the double.

Although the dismissal was a team effort, it was the brilliance and presence of the mind of the skipper that made it possible. Munro did not anticipate the throw and was instead jogging his way to the other end. On realizing the throw from Virat, Munro made the move, but he was too late to realize. He walked back for 64 runs, scored off 47 deliveries.

New Zealand had lost Martin Guptill for just 4 in the fifth over. Munro then added 74 runs for the second wicket with Tim Seifert and keep the hosts in the chase to 166. But India fought back with back-to-back dismissals as Tom Bruce departed just three deliveries after Munro’s dismissal.

ALSO READ: MS Dhoni’s Fans Came Up With A Brilliant Gesture In Wellington

India is having an unassailable 3-0 lead ahead in the five-game series. They won their first two in Auckland and wrapped up a historic series win in Hamilton on Wednesday. This is India’s first T20I series win in New Zealand in three attempts. 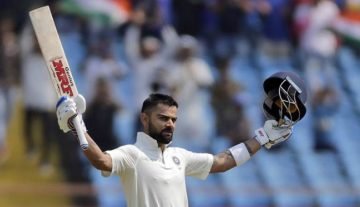