The later bid for the Windies opener Chris Gayle by the Kings XI Punjab (KXIP) team in the Indian Premier League (IPL) auction of 2018 has created a lot of buzz in the fraternity and taken the internet by storm.

While at one point it seemed like the swashbuckling left-handed batsman could have gone unsold in the auctions, but a late bid by the Punjab franchise meant IPL would not be missing its favorite smasher.

Gayle is also more than happy to join his new team and showed his love for the new side by posting by donning a Sikh Turban and later in a video showing off a few lively Punjabi dance steps. This was after he dismissed fellow West Indian all-rounder, Andre Russel in the nets.

In the post uploaded on a social media website, the two Carribean players can be seen engaging in a fun-filled teasing as Russell says that he will hit Gayle for a six and then perform a Punjabi ‘bhangra’ dance.

Ironically, Russell was dismissed caught and bowled as Chris exploded with a huge laugh and then celebrated by patting his thigh in a typical Punjabi fashion. “This Knight Rider player can’t be a Punjabi man,” said Gayle while taking a dig at Russell.

@ar12russell is back but not with a bang after running into the Universe Boss! He said he was gonna dance when hit me for a 6 but it was the other way around…this is one of the dismissal today with the Punjabi dance 😊. #Kings vs #Kkr 🤣😂 #Gothim

Earlier, Gayle who is renowned as of the most nightmarish batsmen of T20 format failed to attract any bidders from several IPL teams. This was even after he holds a stunning record in T20 cricket where he has amassed 3626 runs in 101 matches with a phenomenal strike rate of 151.20 in IPL. It was only in the last phase of the auctions that he was picked up by Kings XI Punjab. 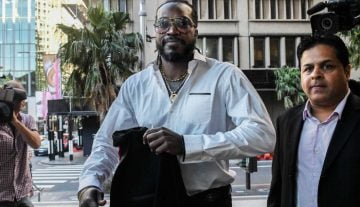