Under the leadership of MS Dhoni. CSK will be aiming to reach the top spot in the Indian Premier League (IPL) 2019 points table. When they take on Kolkata Knight Riders (KKR) in Chennai on Tuesday. CSK have not lost a single match at home in IPL 2019 so far. They aren’t much worried before the match as they were seen having a fun time with all-rounder Ravindra Jadeja.

In a video shared by CSK, Dhoni along with his CSK teammates was seen teasing Jadeja, who came for practice in a new look.  The caption of the video posted by the CSK read: “Say hello to Sir Jaddu’s One day BM (Brown Mane)! #WhistlePodu #Yellove”.

Jadeja’s new brown-colored beard left some of his teammates in splits, even some of them tried to pull it off. CSK have won four out of five matches in the IPL 2019 so far. They are standing at the second position in the points table. Under the captaincy of Dinesh Karthik, KKR won an equal number of matches but managed to top the table with a better net run rate.

While CSK defeated Kings XI Punjab (KXIP) in Chennai on Saturday, KKR looks invincible after a clinical win over Rajasthan Royals (RR) on Sunday night. With both the teams have one of the best spinners in IPL, the onus would be on the batsmen to counter them, given the nature of the pitch at MA Chidambaram Stadium.

While Harbhajan Singh, Imran Tahir and Jadeja ran through the KXIP batsmen to set up the win, Kuldeep Yadav, Sunil Narine and Piyush Chawla kept Jos Buttler under control to restrict the Royals to a below-par total of 139/3 in 20 overs. The spinners in both teams will be keen to have a bowl at Chepauk. 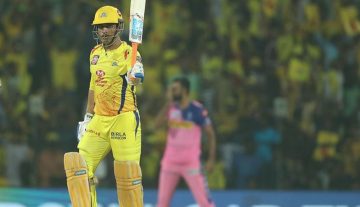