The legendary Indian cricketer, Sachin Tendulkar came out to bat in front of his fan for the first time in four years as he faced an over from Australian women cricketer Ellyse Perry during Bushfire Cricket Bash, a charity match at Junction Oval, Melbourne on Sunday.

The Bushfire Bash was a 10-over per side charity match between Ponting XI and Gilchrist XI, where a bunch of legendary cricketers helped to raise funds for the Australia bushfire relief effort. Tendulkar, who was serving as the coach of Ponting XI, came out of retirement here after a request from Ellyse Perry and faced her for an over during the innings break.

ALSO READ: VVS Laxman Concerned Over The Fitness Of The Indian Pacer

Tendulkar got off the mark with a boundary as Perry bowled an over to the India legend with 10 of her Aussie teammates in the field. Here are the videos of the same:

"Yesterday I figured out I could see the ball. At least I'm seeing the ball, I'm not too sure about hitting it or not!" 😂

Perry had thrown a challenge to Sachin on social media on Saturday afternoon in a video message and the latter had no hesitation in accepting it as he said he would play against his doctor’s advice to face an over from the Australian woman all-rounder.

Perry had said, “Hey Sachin, it’s awesome to have you out here in Australia supporting the Bushfire match. I know you’re coaching one of the teams but a few of us were sitting around last night chatting and we thought it would be absolutely amazing to see you potentially come out of retirement for one over in the innings break out here at Junction Oval.”

She further added, “We’d love to have a bowl to you and obviously fetch a few balls from over the boundary that you’ve hit. We thought it would be an awesome way to raise a bit more money for the Bushfire Appeal, which I know you’re already doing so much for. If you’re at all up for it, we’d love to have you out here I know there’d be some girls very keen to field some balls that you hit. So let us know, and thanks again for everything.” 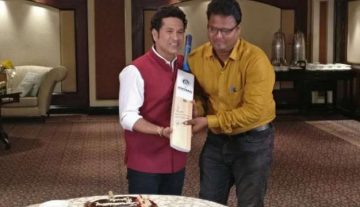