In the fourth over of Suchith, after Watson dismissal, Suresh Raina came out to bat and Rishabh Pant gave him an unusual welcome as he didn’t let Raina go towards the crease and blocked his way in a fun way. After the early dismissal of Watson, Du Plessis and Raina added as many as 83 runs for the second wicket before the former got out in the 14th over of Axar Patel. However, they only managed to score 27 runs in the powerplay.

Soon after Faf’ wicket, Raina got out in the 15th over of J Suchith owing to a brilliant catch by Shikhar Dhawan. After his dismissal, Dhoni started building a partnership with Ravindra Jadeja as they as added 43 runs for the 4th wicket before the latter getting out in the 19th over of Chris Morris. With the help of the late fireworks of Jadeja and Dhoni, CSK amassed 77 runs in the last five over to reach the total of 179/4 in 20 overs.

During the chase, Delhi suffered the loss of Prithvi Shaw in the first over itself. Iyer and Dhawan started building the partnership as they added 49 runs for the second wicket before the Dhawan getting out in the 6th over of Harbhajan Singh. After his dismissal, DC never managed to get back in the game as from 59/2 in 6 overs they were reeling at 85/8 in 12 overs.

In the 12 over of Jadeja, the Chennai crowd witnessed the brilliant fast hands of Dhoni as he sends back Iyer and Morris in the same over with his stumping by a close margin. 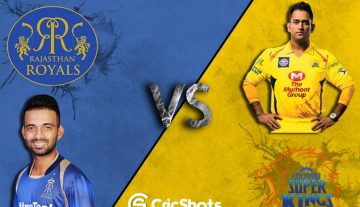