India A is currently locking horns with their New Zealand counterparts. The first of the two four-day matches commence on Thursday at the Hagley Oval in Christchurch. After having lost the One-day series with back-to-back defeats in the final two games, the India A unit was desperate to shrug off the disgrace and start afresh in the first-class games.

The Kiwis won the toss and opted to put the Indian batting unit in. India A opted to go with the opening pair of Abhimanyu Easwaran and Mayank Agarwal with Prithvi Shaw failed to make it to the playing XI. And, one dismissal that really summed up the day for the visitors was the dismissal of their captain Hanuma Vihari.

India A had lost both of their openers in Mayank Agarwal [0] and Abhimanyu Easwaran for a 39-ball 9 within the first hour of play with Sean Solia and Jacob Duffy making some early dents. And, when Priyank Panchal followed suit for a 47-ball 18, India A was in more than -bother with the score reading at 3-34 in 17 overs. But, post that both Shubman Gill and skipper Hanuma Vihari steadied the ship with a gritty partnership of 119 runs for the fourth wicket.

Vihari crossed his half-century in just 79 balls with the help of eight sumptuous boundaries. But just as he was threatening to make a really big score, a bizarre dismissal led to his undoing. It all happened during the 41st over the Indian innings when India A captain played a beautiful looking sweep-shot off Cole McConchie. But, the sweep shot proceeded to hit shin of Rachin Ravindra at short-leg before bouncing all the way back to the wicketkeeper Dane Cleaver took an easy age.

Post the dismissal of Vihari, the onus was on Gill to spearhead the innings and convert his half-century into a really big score but he failed to do so and was dismissed on the score of 83. India A then proceeded to lose their last five wickets for 33 runs and were eventually bundled out for 216 in 54.1 overs.

ALSO READ: New Zealand Will Miss Their Pace Bowling Trio During The ODIs Against India

New Zealand A then proceeded to finish off the day at 2-105 in 33 overs with Will Young standing at 26. India A got the crucial wicket of Rachin Ravindra [47] late in the day and the visitors will be looking to cash-in on it, come day 2. 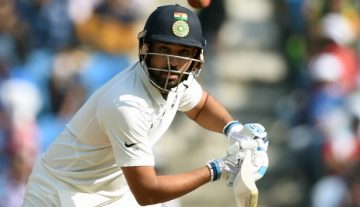