The umpires in cricket have a tough job in their hands as they have to keep their focus intact all the time. They still are human and there is always a scope of error but they try their best to not give the wrong verdict. 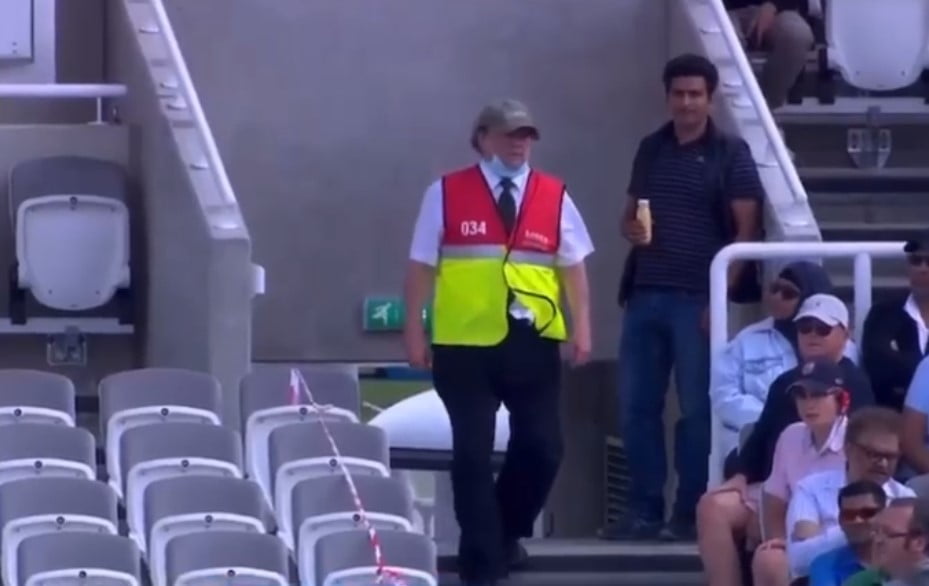 An interesting incident occurred, involving an on-field umpire, during day three of the Lord’s Test between India and England. Umpire Michael Gough was umpiring the 50th over of the England innings when Jonny Bairstow brought the umpire’s notice to something.

Also Read: KL Rahul is frustrated for not scoring big hundred at Lord’s

There was a movement around the sight screen which put Bairstow’s focus off and he asked the umpire to intervene and ask the movement to be stopped. Indian pacer Mohammed Shami was delivering the over and he also indicated for the movement to get stopped.

Turns out, a steward who was standing around the sightscreen was moving. Gough made some signs in his direction which he clearly didn’t understand. The steward started walking forward with every step coming at a slow pace.

Commentators and fans were left in splits by seeing this dual happening between the umpire and the ground staff, who still couldn’t understand even a single word and approached near the umpire. Gough had to jog to the boundary to clear things out as he conveyed his message through another ground staff.

And finally, then the steward got to know about his movements that was putting Bairstow’s concentration off while facing the Indian pacer.

On match’s front, England put a good fightback after losing early wickets on day two. Rory Burns and Joe Root stitched an important partnership yesterday and today it was totally Bairstow and Root show at the Lord’s.

England didn’t concede a single wicket in the first session of day three while managing 97 runs in the process. Root is batting on 89 along with Bairstow who is unbeaten on 51. England are 216/3 by the lunch break and still are 148 runs behind India’s first innings’ haul.