India pacer Jasprit Bumrah is one of the best bowlers in world cricket right now. While he has been taking wickets on a regular basis, his deadly yorkers are enough to trouble the opponents any time as well. However, he has been leading the pace attack for India for quite some time now.

Meanwhile, recently, a video of him went viral, where he can be seen taking a brilliant wicket. This happened in a Test match against the West Indies where he dismissed Darren Bravo. The delivery from Jasprit Bumrah went in that way as the off-stump was seen flying out of the ground and the batsman was left completely surprised.

However, he took five wickets in the innings as well.

What a delivery, What a bowler 🔥🔥 pic.twitter.com/n255I7nXtA

However, Jasrit Bumrah is currently with the Indian team that will play in the upcoming World Test Championship final against New Zealand. And, he is one of the key players for India and has the ability to trouble the Kiwis as well.

Prior to that, veteran India pacer Ishant Sharma said that it is nothing less than playing a 50-over World Cup. Meanwhile, the experienced off-spinner Ravichandran Ashwin has believed that the Kiwis will have the advantage considering they have played two Tests against England recently. However, he also stated that the Indian team will have to adapt and be ready for every challenge as well. Notably, the WTC final will take place from September 18-22 as well.

“I expect a well planned and knit New Zealand team to come at us. Having played two Tests definitely come with an advantage so we have to adapt to that,” Ashwin said to ‘bcci.tv’, referring to New Zealand’s two-match Test series against England.

“It’s been a practical as well as emotional journey, and this is an ICC tournament which is as big as 50 over WC final,” Ishant Sharma said. “Virat (Kohli) has said this is not our sweat and hardwork of just one month but over a period of two years. We had to work harder because of COVID, then rule change happened and we were under pressure and then we won a tough series in Australia. We came back against England as we had to win 3-1.”
Tags indiaJasprit BumrahNew ZealandR Ashwinvirat kohli 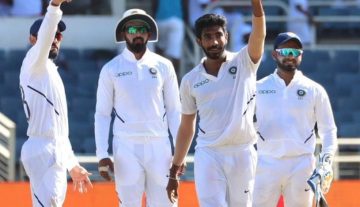