Team India is currently locking horns with the minnows Afghanistan in the ongoing Asia Cup in the fifth game of the super four stage. However, the sixteenth over of the match bowled by Kuldeep Yadav became interesting as the Afghani batsmen Hashmatullah Shahidi and Asghar Afghan were dismissed on back-to-back deliveries and in the first dismissal MS Dhoni came up with a brilliant stumping gave the right suggestion to take the DRS to the Indian skipper MS Dhoni.

Earlier, Afghanistan skipper Asghar decided to bat first after winning the toss and revealed that they have made two changes in the squad. On the other hand, MS Dhoni came out to toss for India as Team India made as many as five changes for the dead rubber.

On the second ball of the over, Kuldeep forced the Shahidi to flick against the line of the ball which spun enough to get past the blade to gave him stumped in the off side. That was some brilliant delivery from Yadav as Dhoni did a  phenomenal glovework. The ball dipped and drifted and landed on a length at leg stump. Shahidi doesn’t get to the pitch as he closes the face and his back leg raises as a result.

However, on the very next ball, Kuldeep went through the defense of the Afghan captain as he bowled a loopy delivery on a length. The bowl landed on the middle and turned into Asghar, flicks his pads, and then crashes into leg stump.

Here is the video of the dismissal – 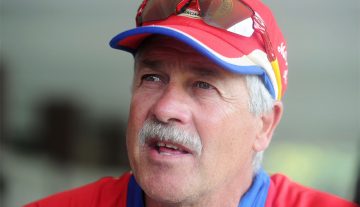