After outplaying the Windies in the recently concluded five-match ODI series by 3-1, Team India took a 1-0 lead in the ongoing three-match T20I series and now they are looking to seal the series in Lucknow. After winning the toss, the Windies skipper, Carlos Brathwaite decided to bowl first keeping the dew factor in mind.

However, Carlos’ decision wasn’t justified as the Indian openers made a 100+ runs opening partnership and India reached the total of 195/2 as Rohit scored a century. However, men in blue restricted the Windies for 52/4 after the 8 overs, thanks to Kuldeep Yadav.

On the first ball of the 8th over, Kuldeep removed Darren Bravo with his stock ball with the help of Rohit’s brilliant slip fielding. Sharma took a blinder at the first slip as Bravo threw his bat toward the ball to cut hard, but Rohit tracked the ball well. On the last ball of the over, the batsman stayed back and searches for the stock ball but it was a googly which came in sharply. He does not pick the wrong’un. Kuldeep barges through his gate and hits the stumps.

WATCH – Rohit Sharma Scored Century in the Final Over 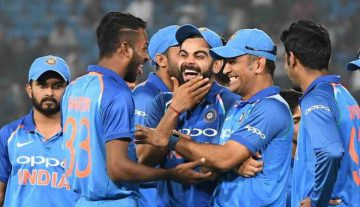