West Indies are currently taking on Australia in the 1st T20I at the Carrara Oval in Queensland. Both teams will try to give their best ahead of the marquee event – T20 World Cup. Meanwhile, West Indies batter Kyle Mayers stole the limelight with a gigantic six. Green bowled to Kyle Mayers and he just cleared out his front leg, and then punched it. The timing was so good that it ended up reaching in the second tier over the sweeper cover as well.

Indian stalwart, Virat Kohli is known for his ability to play a wide range of shots across the park. The right-handed batsman has time and again executed plenty of shots with ease. Meanwhile, a video clip featuring Kohli playing a similar type of like Kyle Mayers, nine years ago has been doing the rounds on social media.

What a classic shot by Kyle Mayers. pic.twitter.com/7AYJ53qRHU 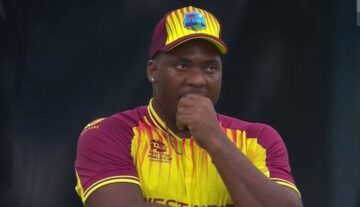