The Indian cricketer, Manish Pandey has always been known for his impeccable fielding and part from that his catches are even more delightful to watch. On Friday. the Karnataka skipper showcased his brilliant catching skills once again, by picking an incredible one-handed stunner to dismissed David Warner in ongoing second ODI of the three-match series between India and Australia at the Saurashtra Cricket Stadium in Rajkot.

After being included in the playing XI as a Rishabh Pant replacement, who missed the match due to concussion Pandey failed to live up to the expectations with the bat, scoring just two runs, but that tells only half a story about his effectiveness. On the third ball of the 4th over, Mohammed Shami gave enough width to the delivery which was there to be driven handsomely.

However, Warner made a mistake of hitting the ball close to his body, meaning it took the aerial route through point. In normal situations, it was a shot traversing its path to the boundary but Manish had different plans. He timed his jump perfectly to put his right hand was extended perfectly to block the ball’s trajectory to ensure that it had been blocked on its path. Pandey easily gobbled the ball and Warner left in complete disbelief and India claimed their first wicket of the series.

Here is the video of the stunning catch:

Earlier in the game, Coming in to bat at his usual batting position of No. 3, Kohli scored his 56th ODI half-century amidst a 103-run second-wicket partnership alongside opening batsman Shikhar Dhawan who was dismissed by Kane Richardson n 96 in the 29th over.

Despite individual half-centuries from Dhawan and Kohli, it was wicket-keeper batsman KL Rahul’s 80 (52) with the help of six fours and three sixes which powered the hosts to 340/6 in 50 overs. 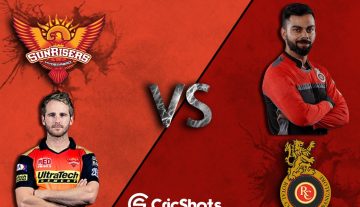