During a Sheffield Shield match at the Gabba in Brisbane between Queensland and Western Australia, opener Matthew Renshaw’s joke proved costly for his team as he was slapped with a rare five-run penalty. The Australian batsman used the wicketkeeper’s gloves to catch a throw during the match after keeper Jimmy Peirson threw his glove on the field while going for the ball towards square leg.

Renshaw then collected the ball with Peirson’s glove on, handing it back later when the keeper returned to his position. However, according to the rule, the wicketkeeper is the only fielder who is allowed to wear gloves on the field. The umpires took the call of slapping Queensland with a five-run penalty.

In an interview to cricket.com.au, Renshaw said that he wore the glove because he thought it was funny and forget about rules. He said, “The glove dropped right next to me so I thought it’d be quite funny to put the glove on and try and take a catch with the glove on. I didn’t really think of the rule at the time, I just thought it’d be quite funny. But the umpires came together and said it was five penalty runs. I know that you’re not supposed to do it, but I thought it was just one of those frowned upon things.”

To his team’s relief, the incident happened while Queensland was headed towards a big-margin victory anyway. The penalty gave Queensland a victory by 211 runs instead of 216.

Renshaw, who has represented Australia in 10 Tests, did not make it to the Ashes squad after a drop in form in the domestic season. He was even dropped from the South Africa tour as well. 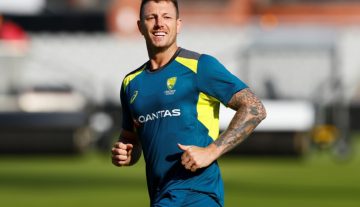 News
By CricShots - Nov 10, 2021
James Pattinson Gets Suspended For Injuring A Player