On Sunday, Engish all-rounder Moeen Ali played a gem of an innings as the second fastest century in ODIs by an Englishman. Ali was hitting the ball aggressively throughout his innings though he shifted from 3rd gear to 6th in the death overs.

Ali scored 102 runs from 57 balls hitting 7 fours and 8 sixes at a strike rate of 178.95. He scored his first 50 runs from 41 balls with a six off Miguel Cummins. No one would have ever thought that Ali would score a century despite coming to bat in the 33rd over at the No.7 position.

Moeen went berserk after scoring the half-century as he scored his next 50 runs off just 12 balls, something similar to what Yuvraj Singh did in a T20 match against England. He struck 2 fours and 6 sixes after completing his 50 and crushed the West Indies bowling lineup, taking England to a mammoth total of 369 for 9 in 50 overs.

The southpaw pulled off a hat-trick of sixes in the 46th over of the first innings off the bowling of Jason Holder. Here are the videos for the same:

WOOOOOW! No words for @MoeenAli – he brings up his century from 56 balls! 😍 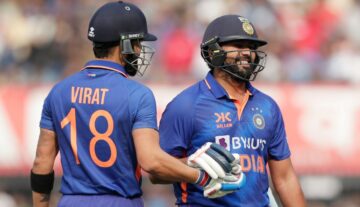