Former Indian skipper, MS Dhoni has always been a sports enthusiast and never misses the opportunity to play a sport other than cricket. He had already retired from Test cricket back in 2014 and it’s been more than four months that he took the cricket field in an international match. And, in a recent update, he was seen playing a local Tennis tournament in Ranchi.

Dhoni played his last international match against New Zealand in the semi-finals of the World Cup 2019. After returning from the mega-event, he also went on to serve for a few weeks in paramilitary force. In 2018, he featured in the men’s doubles category during a local tennis competition and was partnered by a local player. It is also reported that Dhoni won the final played last year in straight sets.

ALSO READ: Wriddhiman Saha Reveals The Truth About His Injury

On Friday, Dhoni and won the first match of the Country Cricket Club Tennis Tournament in the doubles category for men’s. The veteran Indian cricketer was well partnered by Sumit Kumar in the first match. The pair had performed brilliantly in the last season and are expected to continue with the same brilliance in this season of the local tournament.

Here are the pictures and videos of Dhoni playing the tournament:

.@msdhoni and his doubles partner Sumeet clicked with their opponents after the first round earlier today.

Master of all sports! ❤️😇

This one is for all @msdhoni fans who were missing him in action. Here’s your weekend delight.

Mahi is back in action, playing his first match of Tennis Championship in JSCA, Ranchi.#MSDhoni #Dhoni #RanchiDiaries pic.twitter.com/kLaLol0mU4

Walk with Ranchi Ka Rajkumar in his fort be like . . . 📸😇 @msdhoni #Dhoni #Mahiway #RanchiDiary pic.twitter.com/6YoIWMIVc2

.@msdhoni relaxing with the players after the match! #MSDhoni #Dhoni #RanchiDiary pic.twitter.com/apJCJFuDjt

Dhoni took a two-month sabbatical from cricket but, it now seems to have extended for an indefinite length. As nobody knows that when will the former World Cup-winning skipper will mark his return to international cricket.

In his absence, Rishabh Pant has been donning wicket-keeping gloves for Team India. But, his poor performance while keeping and also with the bat has left everyone surprised. And, the fans have already started missing Dhoni’s presence on the field. In the recent past on numerous occasions, the fans had started chanting the name of the former Indian skipper whenever Pant had committed a mistake. 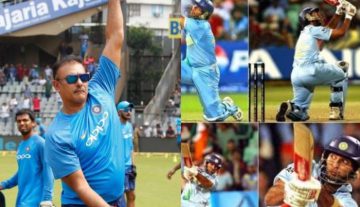