On the various social media platforms, there has always been a bitter-sweet rivalry between the fans of India and Pakistan. They don’t miss any chance of trolling each other. It became an insult to injury for the Indian fans when Pakistan defeated India in the Champions Trophy final last year and it has increased the tussle even more. There was a lot of excitement before the game between the arch-rivals on Wednesday with the social media flooding with the messages. However, the video of the Pakistani fan singing India’s national anthem Stadium is going viral now and is extending an olive branch among the fans.

The much-awaited clash ended up being one-sided game as the men in blue thrashed the men in green by eight wickets and 126 balls to spare. A lot of credit for the same goes to performances of Bhuvneshwar Kumar and Kedar Jadhav. But there was also some sportsman spirit shown by the players on the field. Yuzvendra Chahal was seen tying Usman Khan’s shoelace during Pakistan’s innings.

Moreover, Pakistan’s superfan Bashir Chacha has helped India’s Sudhir Gautam financially due to which he will be able to witness all India’s matches live in the UAE.

WATCH – Disappointed MS Dhoni Fan After His Dismissal On Duck

The process of the whole stadium standing for the national anthems of the two teams before an International game is loved by many. However, an amazing video of a Pakistani singing India’s National Anthem is going viral on social media and the fans are loving it.

In the video, it could be seen that the fan supporting his country Pakistan is singing the whole National Anthem of India while all others around him were only standing. Though the massive respect which the fans showed towards each other proves that the people across the border also want peace.

India and Pakistan will once again face other on Sunday in what is supposed to be a crucial Super Four clash in Dubai. 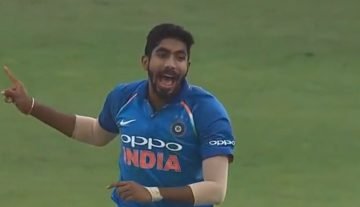