The veteran Indian spinner, Ravichandran Ashwin did not have the standout batting or bowling figures in the Syed Mushtaq Ali T20 Trophy final as Karnataka defeated Tamil Nadu by 1 run on Sunday, but his performance and the show of his emotions created a lot of buzz.

It was Ashwin who first turned the match on its head by taking the wickets of KL Rahul and Mayank Agarwal off consecutive deliveries in the 5th over. He reacted by doing an Imran Tahir-esque celebration, running around the ground in delight. Manish Pandey would calmly play the hat-trick ball for a single down the ground, but Ashwin’s 5th over was exactly what the final needed to be brought to life – an India player showing his emotions in a domestic tournament’s final.

Ashwin brings out the most unexpected weapon in his arsenal — an Imran Tahir-like frenzied run after a wicket.

Karnataka went on to score 180/5 in their 20 overs, with Ashwin having finished with figures of 2/34. He then came out to bat when his team needed 30 off 17 balls – as Vijay Shankar and Baba Aparajith’s heroics ensured we would be going down to the wire in the final.

It’s so hard to wake up after games like what we had last night, #KarVsTN and to play a game of such intensity in the domestic circuit is a delight to say the least. Well done again to both teams. 👏👏

With Tamil Nadu needing 13 to win off the last over, Ashwin was on strike to Krishnappa Gowtham. Vijay Shankar, on 43, was at the other end, with Ashwin having turned down his call for a double off the last ball of the 19th over.

Ashwin proceeded to smash two fours off Gowtham, then punching the air as the equation came down to 5 needed off 4 balls. The celebration would turn out to be premature though – like Mushfiqur Rahim’s celebration had been in 2016 against India.

Ashwin’s helmet had been taken off for the last over, with Gowtham’s spin to deal with.

Shankar was run out off the penultimate ball. With Tamil Nadu needing 3 to win off the last ball, Ashwin also took his leg guard off. With 2 needed to take the match to a Super Over, he wanted to shredd off some weight. Here is how the last over played out:

Here is the drama of last over…. pic.twitter.com/JXqt19TrE9

However, Murugan Ashwin could not connect with the last ball and the two Ashwins could only scamper through for a single as Karnataka won by 1 run. 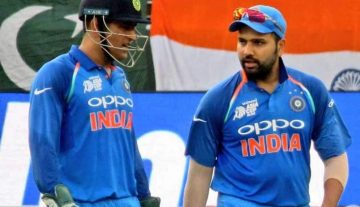