After taking an unassailable 2-1 lead by outclassing the opponents in the Mumbai ODI, the Indian team is currently locking horns with the Windies for the fifth and the final ODI of the ongoing five-match series in Thiruvananthapuram. After winning the toss, the Windies skipper, Jason Holder decide to bat first and they dropped Ashley Nurse who got out of the series due to injury.

While the Indian skipper, Virat Kohli announced an unchanged XI. However, the visitors lost too much too many early in the innings as they have been bundled out for a meager total of 104 under 32 overs and a lot of credit for the same goes to the all-rounder Ravindra Jadeja, who bagged a four-wicket haul. The pitch was looking damp and early in the innings, Indian pacer Bhuvneshwar Kumar and Jasprit Bumrah picked one wicket each in their own first overs itself and hence it supported the spinners as well.

While chasing a small total of 105 runs, India faced the early dismissal of Shikhar Dhawan in the second over of the innings followed by a dropped catch of Virat Kohli and even Rohit Sharma fell on a no-ball. After those hiccups, Rohit and Kohli saw through India under 15 overs. The magic happened in the 12th over of India’s chase as Kohli and Sharm scored 16 runs off it combinedly, but only one run out of it was score by Virat.

On the first two balls of the over, Rohit smashed back-to-back fours first being on the long leg boundary as Keemo Paul bowled a short ball which didn’t bounce high and on the next delivery, Sharma stepped out of the crease to a slog, but the bowl took a top edge and it went towards the third man boundary for another four, despite the diving effort of Kieran Powell.

After those boundaries, both the batsmen took singles and on the fifth bowl of the over, Rohit smashed a huge six over the long-off boundary.  It was a length ball on off stump by Paul and hitman kept his front leg away and goes on the charge as he reached the 49-run mark as well. In the previous over, he also completed 1000 ODI runs in 2018. 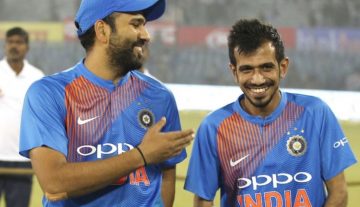