The young Indian opener, Shafali Verma went on to score a boundary from behind the stumps as she played yet another praiseworthy innings. During the 14th match of the ongoing ICC Women’s T20 Cricket World Cup between India and Sri Lanka in Melbourne, she continued to intrigue the fans by playing a highly innovative shot.

The incident took place on the first delivery of the 10th over of India’s chase when Verma played a delivery from Sri Lanka spinner Shashikala Siriwardene from behind the wickets for a boundary. In what was an extremely slow delivery even for a spinner, Verma judged the pace of the ball perfectly and moved on the back foot to hit the ball through the leg-side.

Opening the batting with Smriti Mandhana (17), Shafali played yet another match-winning knock as she was the highest run-score for India with 47 (34) with the help of seven fours and a six before getting out in the 11th over.

Chasing a below-par target of 114 runs, India completed the chase in the 15th over to win their fourth consecutive match of the tournament. It is worth mentioning that table-toppers India has qualified for the semi-finals without losing a single match.

After Sri Lanka captain, Chamari Atapattu won the toss and chose to bat, a below-par performance from the Sri Lankan batswomen saw them scoring 113/9 in 20 overs. Having scored 33 (24) with the help of five fours and a six, Atapattu once again was the highest run-scorer for her team. With bowling figures of 4-0-23-4, India spinner Radha Yadav was the pick of their bowlers.

Here is how Twitterati reacted after watching the shot:

4️⃣ wins out of 4️⃣ matches! 💪#TeamIndia head into the semis by topping Group A. Radha Yadav's 4/23 followed by Shafali Verma's 47 off 34 guide 🇮🇳 to the win!#INDvSL #T20WorldCup #OrangeArmy (📸: @T20WorldCup) pic.twitter.com/QyHNqjxQjJ 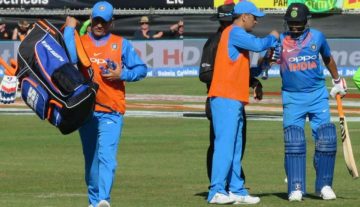