Currently, the Kings XI Punjab (KXIP) are locking horns with Royal Challengers Bangalore (RCB) at PCA’s IS Bindra Stadium in Mohali. After winning the toss, the RCB skipper, Virat Kohli asked the hosts to bat first citing the chances of heavy dew in the second innings. However, the hosts started their innings brilliantly as their openers, KL Rahul and Chris Gayle almost smashed all the Bangalore bowlers in the powerplay.

During the toss, the MI skipper, R Ashwin revealed that they have made three changes in their squad Hardus Viljoen, Karun Nair, and Ankit Rajpoot made way for Mayank Agarwal, Andrew Tyer, and M Ashwin. On the other hand, RCB made just one change as Tim Southee made way for Umesh Yadav.

WATCH – Yuzvendra Chahal Gets A Couple Of Six And Out

On penultimate ball of the 13h over, Sarfaraz Khan played a starfish shot down to fine leg for a six as Siraj bowled a delivery at 143kph, and Khan used the pace of the ball to turn it over. Here is the video of the shot:

Siraj dismissed Sarfaraz on the very next delivery as he delivered a short ball in response, and Khan attempted a hook shot but ended up nicking it on the way through to Parthiv Patel, who took a good catch away to his left. 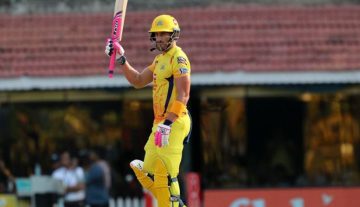