In a sportsperson’ career, staying fit is the primary things. Whichever sports does a player is playing, he needs to keep his body in good shape to excel in your field. Keeping up with good fitness levels help the players to focus more on the game rather than their body. The current Indian team has set high standards and fitness has become one of the major criteria for getting into the national team. The Yo-Yo test is a testimony to the fact that BCCI is inclined towards producing physically fit cricketers.

India’s Sports minister Rajyavardhan Singh Rathore has started a new fitness challenge in India by the name of #HumFitTohIndiaFit. He shared a video of himself doing pushups and nominated few Indian celebrities to take up the fitness challenge. Virat Kohli, the Indian skipper has already done his bit by taking up the challenge and promoting the campaign. The veteran batsman Gautam Gambhir became the latest cricketer to join the list.

Another day, another #FitnessChallenge and this time for @shahidkapoor. Come on superstar show us how you do it. #HumFitTohIndiaFit @Ra_THORe pic.twitter.com/ZoaAxhXmBJ

Gambhir shared a video of himself going through a fitness drill. In the process, he has asked Shahid Kapoor to take up the challenge and show how it is to be done exactly. Rathore’s initiative is turning out to be a great initiative as he was keen to promote fitness across the nation. As more and more people will take up this challenge, the purpose of this initiative will serve.

Gautam Gambhir did not have a good season in the IPL 2018 with the Delhi Daredevils (DD). He gave away his captaincy role midway in the tournament after the team lost a few matches and also failed to contribute with the bat. However, the change did not prevent the franchise from knocked out of the tournament before the playoffs yet another time in the Indian Premier League. 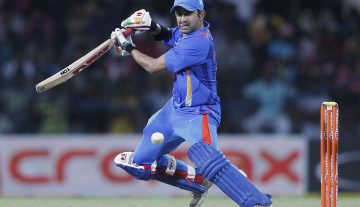