After New Zealand’s Ross Taylor was handed a lifeline by the decision review system (DRS) on Day 2 of the ongoing Boxing Day Test, Australia skipper Tim Paine came up with the best possible way to sledge the batsman in the middle. The latter summarised that maybe Taylor knows the person who is in charge of dealing with ball-tracking, and was heard saying ‘maybe, he knows the bloke’.

The incident had happened in the 14th over of the Kiwi innings. James Pattinson had Taylor adjudged LBW by the on-field umpire, but the Kiwi batsman decided to take the DRS, and ball-tracking showed that the delivery was missing the leg-stump.

Cricket.com.au’s official handle tweeted the video of the incident and captioned the post as: “He knows the bloke in the truck”. On the stump mic, Paine was heard saying, “That’s twice I have seen him dead out plumb and not given. Broady (Stuart Broad) hit him on the pad in New Zealand, which was absolutely hitting middle-stump and a missing leg. He knows the bloke in the truck.”

Taylor soon replied by saying: “…I actually hit that one in New Zealand.”

Australia managed to reach a commanding position on day two of the Boxing Day Test on Friday against New Zealand here at the Melbourne Cricket Ground (MCG). In the game, Paine and Steeve Smith scored half-centuries and Travis Head went on to score his 2nd Test ton. Paine and Head added 150 runs for the 6th wicket.

WATCH – Dale Steyn Had A Revenge Moment On His BBL Debut

New Zealand ended the day at 44/2 with Tom Blundell and Kane Williamson back in the dug-out, after bundling out Australia for 467. Taylor and Tom Latham are still unbeaten for the visitors. 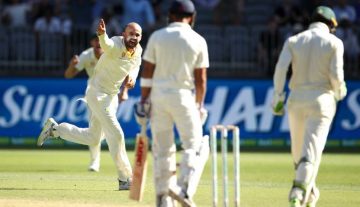