The Indian cricket team skipper Virat Kohli enjoys a massive fan following all over the world. He is an influencer for many because of his tremendous success as a cricketer and as a captain. He ís currently standing at the numero uno position at the One Day International (ODI) batsman ranking with over 9,000 runs under his belt, including 35 centuries and 46 half-centuries.

On several occasions, Virat went out of his way to let his fans know that he valued their love and support. Sometimes, he has breached the security cover to meet his ardent fans to gave an autograph and even clicked selfies with them.

ALSO READ: Virat Kohli Gets The Biggest Award For His Fan Engagement Skills

One such incident happened recently when the Indian captain, greeted his four little fans who were waiting for the RCB skipper in a team hotel. The 29-year-old stopped on his way, spoke to the four little kids and signed autographs for them on their caps, bats, books, etc.

After meeting the little fans, Virat took to Twitter to share a video of his interaction. He wrote:

RCB is currently standing at the sixth position on the IPL 2018 points table with just 2 wins in 5 matches they have played so far. On the other hand, CSK is enjoying a great run as they are second from the top, with 4 victories from 5 games in hand.

If CSK wins today’s match, they would replace Kings XI Punjab (KXIP) to top the table. 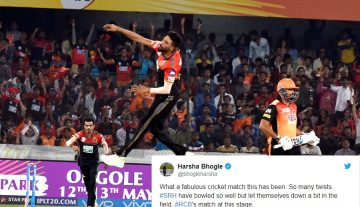