Currently, the Kolkata Knight Riders (KKR) and Royal Challengers Bangalore (RCB) are locking horns with each other at the iconic Eden Gardens in Kolkata. After winning the toss, the KKR skipper, Dinesh Karthik asked the visitors to bat first. However, the visitors started on a rough note as their lost Parthiv Patel in the fourth over of the match itself.

Kohli and Parthiv started their innings cautiously as they scored just 17 runs in the first three over and on the second ball of the fourth over itself, as Sunil Narine got successful in getting the wicket of Narine owing to a juggling catch by Nitish Rana at deep mid-wicket. Surprisingly, after Parthiv’s dismissal, Akshdeep Nath came out to bat despite having players like Moeen Ali, Marcus Stoinis and Klaasen in the batting line-up.

However, that gamble failed for RCB as Nath was dismissed by Andre Russell in the 9th over, then Moeen Ali came out to bat and he built a strong partnership with Kohli. Both of them added 90 runs for the third wicket, before Ali getting out in the 16th over by Kuldeep Yadav. However, before getting out on the final ball of the over, Ali smashed Kuldeep for 27 runs with the help of three sixes and a couple of fours.

WATCH – Moeen Ali Smashed Kuldeep For 27 Runs Before Getting Out

After Ali’s dismissal, Kohli kept on slogging the KKR bowlers and brought up his fifth IPL century in just 58 balls with the help of 4 maximums and 9 boundaries. It was an innings to remember for Kohli, who helped RCB reach a mammoth score of  213/4. They amassed as many as 91 runs in the last 5 overs.

WATCH – Virat Kohli Saying No To Mankading To Sunil Narine

During the chase, KKR lost Chris Lynn in the first over itself owing to some brilliant bowling by Steyn. In the fourth over, even Narine got out followed by Narine getting out in the fourth over. In the very next over, Steyn dismissed the young Shubman Gill with the help of a brilliant catch by Kohli.

Gill attempted a flighted drive on a yorker length ball outside off, he wants to drive it through the offside but ends up toe-ending it. The ball flew towards mid-off, and Kohli sticks out a hand over his head and grabs the ball. Firstly, the ball bounced from his hands, but he did well with great presence of mind to hold on to it near his waist. 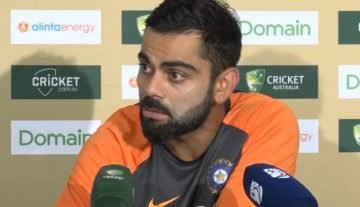 News
By CricShots - Jan 2, 2019
Virat Kohli Not Bothered About His Back Injuries