On Sunday, the Indian skipper, Team India skipper Virat Kohli gave a world another glimpse into his supreme fitness skills, after pulling off an excellent diving catch in the second T20I of the five-match series against New Zealand in Auckland, accounting for the key dismissal of New Zealand opener Colin Munro.

Munro attempted to hit the back of length delivery over the in-field on the off-side. However, the southpaw couldn’t managed to connect the ball and ended up clipping the top half of the bat, resulting in a flat hit towards extra cover. Virat ensured no mishaps at this stage, pulling off his second catch of the game.

What A Catch from Captain Kohli👌🏻 pic.twitter.com/FJ55F5HoqE

The second match of the T20 series between New Zealand and India is being played in Auckland.  The Kiwi captain Kane Williamson decided to bat first to win the toss. India won the first match of the series on the same venue by 6 wickets. However,  the Indian bowlers bowled brilliantly in the second game by restricting the hosts at a below-par total of 132/5 in their quota of 20 overs.

The Indian bowlers started to put pressure on New Zealand early in teh innings. Munro couldn’t open his arms freely and play the shots. However, none of the New Zealand batsmen have been able to play big innings on this pitch. For India, Ravindra Jadeja took two wickets for India while Jasprit Bumrah, Shardul Thakur, and Yuzvendra Chahal took one wicket each. 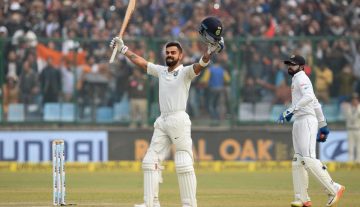