In 2012, Australia hosted a tri-series with India and Sri Lanka, and it was the 11th match of the series between the visiting teams on February 28, when the Indian skipper, Virat Kohli got the tag of the chase-master. The Men in Blue rewrote the history books by chasing a massive knock of 320 in just 36.4 overs owing to a brilliant knock of 133 in 86 balls from Virat.

Sri Lanka’s Tillakaratne Dilshan and Kumar Sangakkara went on to score centuries in the first innings as they registered the scored of 160 and 105 runs, respectively. Owing to those prolific knocks, Sri Lanka reached a daunting score of 320 with the loss of four wickets in their quota of 50 overs

During India’s chase, the Indian openers, Sachin Tendulkar and Virender Sehwag, provided the much-needed momentum as they played quickfire knocks of 39 and 30 runs, respectively. But, both went back to the pavilion by the 10th over. Then, Gautam Gambhir stood his ground for a better half; a run-out sent the southpaw back to the pavilion after in the 28th over after adding 115 runs with Kohli for the third wicket.


After Sachin Sehwag’s dismissal, India’s chances of defeating Sri Lanka looked grim, with more than 200 runs left to chase in just 30 overs. But as Virat took the crease and built some crucial partnerships with Gambhir and Suresh Raina without compromising on the run-rate played one of his best ODI knocks of 133 runs in 86 balls (not out) with the help of 16 boundaries and a couple of sixes.

Here is the video of the prolific knock:

Just after completing his century in the 35th over when India needed 42 runs in 6 overs to qualify, Kohli decided to smash Lasith Malinga, who was the best bowler for the Islanders, and he amassed 24 runs in the over. That over consisted of the unforgettable six over square leg, which Kohli smashed just with the help of his wrists.

With the help of Raina also bagged a quick 40 in 24 balls, Kohli helped India to get over the line in 36.4 overs as he smashed a beautiful boundary with the help of an off-dive towards long-off.

Despite India’s performance in that match, the then Indian skipper, MS Dhoni, could not lead the Men in Blue to victory in the series. It was Australia who triumphed over Sri Lanka in the finals of the tri-nation series in 2012. 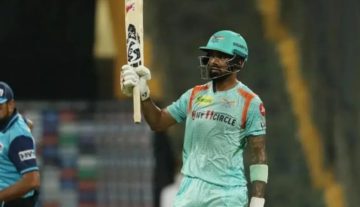