On Thursday, Team India locked horns with the Ireland team for the first T20I of the 2-match series and they defeated the hosts by a margin of 76 runs with Kuldeep Yadav bowling his career-best spell of 4/21. However, in the 7th over of the chase, another Indian leggie, Yuzvendra was bowling and Irish batsman Norman Knight Shannon was on strike, who was caught in front on stumps but, the umpire said no. MS Dhoni was spot on with DRS yet again but due to the lack of technology in Ireland, the DRS was missing.

On the previous delivery, Shannon had slog-swept Chahal over mid-wicket for six, but on the very next ball, Chahal responded with a flat wrong one which turned a bit. The batsman aimed for another slog sweep but the ball hit him right in front of the wickets. This looked plumb, but, umpire saw it in a different way.

Chahal was pretty sure that it was a clear LBW dismissal. The ball was clearly hitting Shannon’s pad in line of the stumps and hence he looked at Dhoni in anticipation of a review. However, Mahi shook his head and suggested that was no DRS in the series.

All the same, MSD was looking visibly disappointed as he too thought that this could have been a potential wicket.

Earlier, Rohit Sharma and Shikhar Dhawan led the way with a record partnership of 160 runs. It was surprising when Suresh Raina came out to bat at one down instead of skipper Virat Kohli. All the same, he could not leave an impact as the southpaw was dismissed after hitting a couple of boundaries. Rohit missed the century by a narrow margin of 3 runs as he was dismissed on 97 by Peter Chase in the final over of the innings.

Watch the video of the incident here:

Dhoni is available, DRS is not! pic.twitter.com/bNfCviFJeI 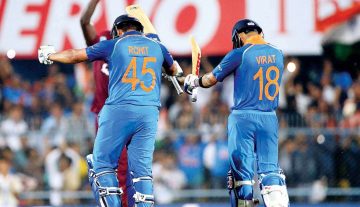