Australian cricket team is going through a happy phase in the One-Day International format. They have won two successive big ODI series wins, one in India and the other in UAE against Pakistan. The way they dominated Pakistan in UAE is remarkable as they clean swept their opponents to win the series by 5-0. Now, Australian skipper Aaron Finch has warned the oppositions that Aussies are coming to defend their World Cup crown.

Earlier, Australia was having the worst phase on the cricket field as they won just three out of 18 ODI matches that they played in 2018. During five-match ODI series against India, they were 2-0 down but made a strong comeback to win the series by 3-2. They didn’t stop here and went on to win all five games and Pakistan to alarm a warning for other teams, who were writing them off ahead of the ICC Cricket World Cup 2019.

“We’ll go to the World Cup with a lot of confidence now, even after a lot of people wrote us off. Potentially we had a real focus coming here and that was our last hit-out before the World Cup 2019 so we wanted to go into that tournament with a lot of momentum,” said Finch.

Steve Smith and David Warner have completed their bans and will make a comeback in Australia’s World Cup squad. The Australia will face a selection conundrum ahead of the team selection as there are several in-form players, who helped Australia to revive from this situation. Mitchell Starc and Josh Hazelwood will retun into the team once they are fit to play.

Finch talked about this happy headache and said there will be some unhappy guys.

“There will be some unlucky guys. Everyone who has an opportunity has played some great cricket. At the end of the day there will be some tough calls, but its exciting for Australia at the same time because six month back a lot of people were slamming us,” Australian skipper quoted.

“A lot of people were writing us off, not in just the one-day cricket but in all forms of the game. It’s been really positive last couple of months and we have been building nicely.”

Finch was going through a drought of runs but his found his mojo back during the five-match ODI series in India. He continued his good form in UAE as well and scored a record 451 runs in the series, which earned him the man of the series award. 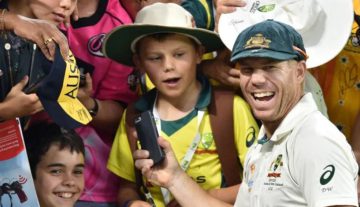 Videos
By CricShots - Jan 7, 2020
WATCH – David Warner Does A Heart Warming Gesture For His Little Fan