Australia players Steve Smith and David Warner finally met with their national teammates in UAE for the upcoming series as their one-year-long suspensions are going to end soon. They were involved in the Newlands ball-tampering controversy which led them to one year ban from international cricket. The team is currently preparing for a five-match ODI series against Pakistan in UAE ahead of the Indian Premier League (IPL). After the series, the players will join their respective sides.

While talking about this, David Warner said cricket.com.au., “It’s been awesome. It’s like we didn’t really leave, the boys were very accepting of us coming in and with open arms. (There were) a lot of big hugs and cuddles. It’s been great. It’s good to see the spirit they’re in after a great series win in India and I am obviously looking forward to watching them play against Pakistan here and hopefully they win that series as well.”

The team has been in good touch right now. After having won the T20I series in India, they have won the five-match ODI series by 3-2 against India. After having started with 0-2 to end the series with 3-2 is something really commendable.

“I guess it’s just been going through the values that are instilled in the team at the moment and making sure we are on the right path looking forward to what’s coming up; a huge World Cup and an Ashes series in England,” Steve Smith said. “It’s pretty exciting times ahead for the team and just making sure everyone’s on the right path and heading in the same direction.”

“Making sure that we are aligned with the team values moving forward,” Warner added. “Obviously being out for 12 months there’s been a big change, which is great, and it’s about just accepting that and playing what our role in the team should be moving forward.”

However, the coach Langer was very warm in the acceptance of the pair. They are one of the best pairs and will play a crucial role in the upcoming tournament and the upcoming ICC World Cup as well.

“It’s great to have them back in the team. It’s like two brothers coming home. They have been received really well, we had a good night together last night and had some great meetings today so it’s been really positive.”

Both the players are now set to play in the upcoming Indian Premier League. While Warner has returned from an elbow injury, Smith is currently recovering from elbow surgery.

“I love playing in India,” Smith said. “The IPL’s a terrific tournament and the elbow is tracking really well. I’ve been batting for the last two weeks and (am) able to play all shots, got my power back, so I am tracking really well and I’m just excited to play again.” 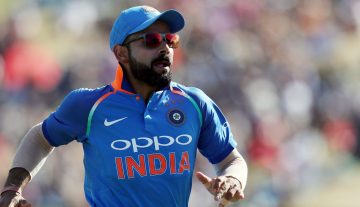 News
By Aditya Pratap - Feb 12, 2019
Sangakkara Senses Kohli To Be The Greatest Cricketer