The 2019 ICC World Cup is scheduled to commence in a week’s time and the buzz for the tournament is increasing each passing day. Every other cricketing expert is trying to pick the favorites, but there is a unanimity of sorts as most are going for England and India. Former West Indies skipper, Brian Lara is also among those who feel that the Indian team that will compete in the World Cup under the leadership of Virat Kohli is quite balanced and is capable of clinching the title.

Currently, both India and the West Indies have lifted the coveted trophy twice, but Lara never make the semi-finals and he considers hosts England as one of the title contenders not only because of the home advantage but also the form they are in. England is currently ranked No.1 side in the ODIs and recently thrashed Pakistan 4-0 in an ODI series at home.

During a chat with Cricbuzz, Lara said, “Nobody will be surprised if India becomes the champions. They have been doing well in different conditions. India has a very balanced team. It will not be upset if they win the Cup. No doubt India is very strong.”

Talking about the England team, the veteran batsman said, “I don’t know whether they are favorites or not but they are definitely one of the contenders. Any host nation will try to become champion in any sport. Naturally, England will also try to give their best shot and take away the Cup. We have to remember that although the tournament started in 1975, they have never won a World Cup title. They will try this time like never before and to be honest, they have got a very good side.”

England had made the semi-finals each time between 1975 and 1992 and even made the finals thrice in that period. However, between 1996 and 2015, they never managed to reach the semi-final stage even once. 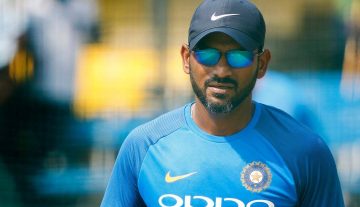 News
By CricShots - Dec 6, 2019
R Sridhar Takes A Dig At Yuzvendra Chahal For His Batting