The veteran Australian opener, David Warner was booed and ridiculed by the English crowd during the World Cup 2019 warm-up match against England on Saturday. Warner was playing his first game in England after getting banned for a year for his involvement in the ball-tampering scandal.

Both Warner and former Australia skipper, Steve Smith got back to their international duties earlier this month after completing 12-month suspensions for their roles in a ball-tampering scandal in South Africa.

The jeers that greeted Warner were audible, although the Hampshire Bowl ground was far from full. When he was coming out to bat at the crease, one fan shouted, “Get off Warner you cheat.”

Australia is set to be in England for over four months on a lengthy tour that includes both the World Cup and the subsequent five-Test Ashes series. According to the reports of Britain’s Daily Mirror newspaper said Warner’s manager had sought security assurances from Cricket Australia, with the batsman’s wife wanting to give birth to their third child in Britain.

During the combined captains’ press meet, the Australian skipper Aaron Finch said, “Once the World Cup gets underway and you start getting into the tournament, probably the game against England, and then further on the Ashes there’s no doubt the crowd will start to play a bit of a part but that’s expected. No matter where you go the fans play a big part.”

Earlier, England’s Barmy Army fired the first shots at their arch-rivals with a brutal pot shot on Twitter.

Smith, Warner, and Cameron Bancroft were all banned for altering the condition of the ball with sandpaper. 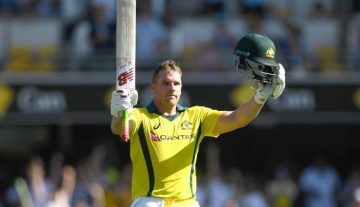