England has announced their preliminary 15-member squad for the upcoming ICC World Cup 2019 and unfortunately, Jofra Archer has failed to make a cut. Along with Chirs Jordon, Archer has been included in the 17-member squad for the five-match ODI series against Pakistan and will be in contention for a place in the World Cup squad depending on his performance in the series against Pakistan. England will finalize their final 15-man World Cup squad after the Pakistan series, which will be concluding on May 19.

England’s pace attack comprises of Chris Woakes, Mark Wood, Liam Plunkett, David Willey, and Tom Curran. The most surprising pick, however, is Joe Denly has also been included as the back-up for the spin duo of Moeen Ali and Adil Rashid. However, Archer will be available for England selection for the first time as he has now completed his three-year qualification to become a British citizen on March 17.

ALSO READ: Ambati Rayudu gets support from ICC after his exclusion

Describing the same, ECB’s national selector, ED Smith said, “In line with ICC regulations, we have to name a preliminary squad of 15 for the ICC Men’s Cricket World Cup before April 23. However, all 17 players named in the Royal London ODIs against Pakistan can stake a claim to be in the final 15-man squad, finalized at the end of that series. The selection panel has been impressed with Jofra Archer’s performances in domestic and franchise cricket. He is a very talented and exciting cricketer.”

Jordan played his last ODI in September 2016 and he has now been considered for the World Cup for his impressive performances against Sri Lanka and Windies in T20Is.

Talking about the same, Smith said, “Chris Jordan, a regular in IT20 squads over the past few years, has continued to develop as a cricketer – as we saw in the IT20s in the West Indies. He fully deserves his return to the ODI squad. With regard to resting players, we are conscious of managing player workloads leading into such an important summer so that players are in the best possible condition for the World Cup. That was also a factor in the way we have selected these three squads.” 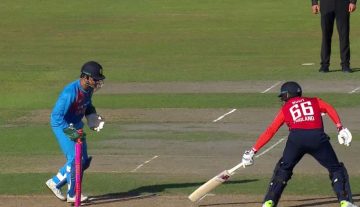 Videos
By CricShots - Jul 3, 2018
Eng vs Ind: Kuldeep Yadav Dismantles England In One Over