On Saturday, Team India is scheduled to play their first practice game against New Zealand. However, just 24 hours after reaching England, the men in blue started practicing hard ahead of the game. The Indian skipper, Virat Kohli, and his men were seen heading straight to the ground for their first practice session but, it did not end on the best of notes as opener Shikhar Dhawan was hit on the helmet and he sustained a small injury.

The practice session commenced with some motivating words from the head coach Ravi Shastri. Then, Kohli joined the side to give a pep talk to the team before they headed for their warmups. As the team got united after a gap if two months, they started off with the bonding session where they played footy volleyball first. Then, it was the ‘Steal the Bib’ game that kept them entertained with the players thoroughly enjoying themselves.

After this fun session, it was the turn for the net session. Virat was the first to head into the nets with all other batsmen joining turn by turn. Meanwhile, MS Dhoni spent his time facing the short ball. He was seen practicing the pull and hook shots keeping the conditions in mind, according to Star Sports.

On the other hand, Dhawan took some throwdowns from the batting coach Sanjay Bangar. One of the short balls that were bowled heaved at a ferocious pace towards him and hit him hard on the helmet. His practice session had to be cut short after this blow as physio Pattrick Farhart looked at his injury. Gabbar got hit in the region around his lips and the jaw.

However, Dhawan aka “Gabbar” is a great fighter and walked off the field with a smile on his face. Although he looked to be in pain initially, he seemed better as he went into the dressing room. The intensity of the injury is yet to be confirmed. 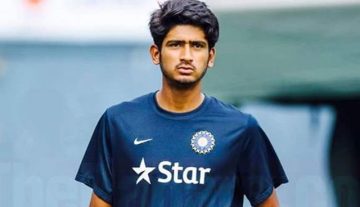 News
By Sandy - Oct 20, 2018
Khaleel Ahmed: My left-arm pace can be beneficial for India