Ever since India’s tour to England in 2018, the discussion regarding the Indian players’ wives and families have been increased quite a bit. While the players prefers t be accompanied by their families on a long overseas tour, the BCCI has a different take on that. But after a prolonged discussion, the Indian team management and the board have managed to find some common grounds.

According to the new arrangement, wives and family members of Indian players will be allowed to stay with the cricketers for a 15-day period and that too 21 days after team India’s first match.  Consequently, the WAGs of Indian cricketers including skipper Virat Kohli’s wife Anushka Sharma will surely be missing the high-profile game bet India-Pakistan clash. The much-awaited marquee clash will take place on June 16 at Old Trafford in Manchester.

Now, it is up to the player and family members to decide when they arrive in England for a 15-day period once the team’s 21-day stay in England comes to an end. According to the recent reports of the Times of India, the BCCI recently approved the new arrangements. The families of the cricketers, however, can attend the knockout game and also the final provided the schedule for the families should align with the World Cup schedule and with the hope that India makes it to the title-decider.

One of the sources of TOI said, “If Kohli’s wife Anushka Sharma wants to stay till the last phase of the tournament, she would have to plan it accordingly so that the 15-day window falls into the knockout games.”

The Men in Blue will leave for England by the third week of May. Ahead of the league stage of the tournament, all the teams including the men in blue are scheduled to play two warm-up games. Virat Kohli and his men will be locking horns New Zealand and Bangladesh on 25 May and 28 May respectively in their warm-up fixtures. The main event will commence on May 30 with hosts England taking on South Africa in the tournament opener.

However, Team India will be commencing their campaign on June 05 against South Africa. But the cricketers’ families will be able to attend the World Cup only after June 22 clash against Afghanistan due to the 21-day rule. After the first 21-day period is over, India will play four matches in the group stages. 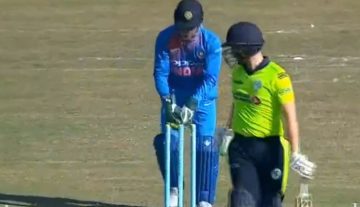 Videos
By CricShots - Jun 27, 2018
Ire vs Ind: One of the Easiest Stumpings For MS Dhoni