The day four of the Sydney Test majorly affected due to the rain and bad light. In the very short day, India have enforced the follow-on and Australia batted shortly in their second innings before bad light stopped the day.

Due to the rain and bad light, it was a delayed start on day four of the Test match. Even after the lunch break, it took more time to finally begin the day. Starting the day on their overnight score 236/6, Australian batsman Pat Cummins (25 runs) was bowled without adding any runs on the day.

Another unbeaten overnight batsman Peter Handscomb followed Cummins soon after scoring 37 runs off 111 balls (5 fours). In the very next over, Nathan Lyon was dismissed for a duck.

For the last wicket, Mitchell Starc and Josh Hazlewood put a 42-run partnership to reach a total of 300. While Starc was not out on 29 runs, Hazlewood scored 21 runs before losing his wicket.

Among the Indian bowlers, the left-arm chinaman Kuldeep Yadav bagged five wickets as he had a bowling figure of 31.5-6-99-5. Also, Ravindra Jadeja (2/73) and Mohammed Shami (2/58) picked up two wickets each while Jasprit Bumrah (1/62) claimed the other wicket in that innings.

Leading by 322 runs at the end of the first innings clashes, Indian skipper Virat Kohli decided to enforce the follow-on. However, when Australia was batting on 6/0 in their follow-on innings, the bad light stopped the remaining day’s play. 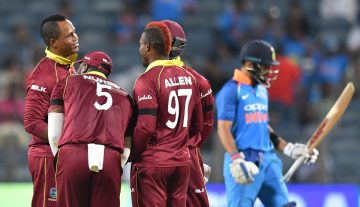