On July 14, 2019, during the final of the ICC Men’s Cricket World Cup final the cricket fans witnessed a super over draw for the first time as England defeated New Zealand to lift their maiden title on the basis of boundary countback rule at Lord’s Cricket Ground. The 50 overs in both innings of the final wasn’t sufficient to decide the winner of the match ever after the subsequent super over.

New Zealand ended up being the runners-up in the ICC World Cup for the consecutive editions (2015, 2019) as they lost to Australia in the final of the previous edition. The Kiwis under the leadership of Brendon McCullum suffered a loss against Australia in 2015 by seven wickets.

In the 2019 finals, New Zealand had won the toss and decided to bat first. The Kiwis managed to register a total of 241/8 in the allotted fifty overs.

Henry Nicholls was teh highest run-scorer for the Kiwis as he played a knock of 55 runs whereas Chris Woakes and Liam Plunkett scalped three wickets each for England.

Chasing a decent looking target, England didn’t get the much-needed start as they kept on losing wickets at regular intervals, and in the final over they needed 15 runs for the win.

ALSO READ: Twitterati Reacts To Brilliant Win Of The Windies Team Against England

England received a dash of luck when Martin Guptill’s throw went to the boundary as he attempted to run-out Ben Stokes, giving England four runs due to an over-throw. But New Zealand managed to keep their nerve and took the match into the super over. Eventually, the hosts managed to register their maiden World Cup title. 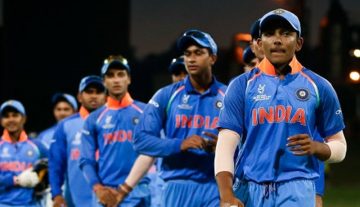