On this day, in 2007, the flamboyant Indian all-rounder Yuvraj Singh grabbed a lot of eyeballs when he pulled off something which had only been done once before in international cricket. In a group game during the first edition of the ICC World T20, Yuvraj smashed Stuart Broad for six sixes in a row at Kingsmead in Durban.

The southpaw had a heated conversation with Andrew Flintoff who bowled the 18th over of the game as Yuvraj smashed him for back-to-back fours. The umpires stepped in to break the fight but a visibly pumped-up Yuvraj was not done, and Broad had to suffer his onslaught. The Men in Blue were on 171 for 3 at the time with Yuvraj and MS Dhoni at the crease, looking to finish off on a high.

First six was over cow corner, the next over backward square leg, the third one over extra cover, then a cut shot over deep point to a full toss, the fifth one a ferocious hit over deep midwicket and finally a humungous hit over wide long-on. The 19th over of the Indian innings turned out to be one of the most memorable ones in the Indian history and in a lot of ways changed the landscape of how T20Is were going to impact world cricket.

6⃣6⃣6⃣6⃣6⃣6⃣#OnThisDay in 2007, @YUVSTRONG12 etched his name into the record books by hitting six sixes in an over. 💪💪 pic.twitter.com/VDKAQJLof2

Yuvraj rocketed away to a 12-ball half-century, which to date remains the fastest fifty in T20Is. He eventually finished on 58 in 16 balls, his innings laced with three fours and seven sixes, as India amassed 218 for 4. In reply, England was restricted to 200 for 6 giving India an 18-run win.

This was the first and so far remains the only instance of any batsman smashing six sixes in an over in a T20I. Herschelle Gibbs had achieved the feat in an ODI during the World Cup in 2007 against the Netherlands while Gary Sobers and Ravi Shastri have managed to do so in first-class cricket.

Here is the video of the sixes: 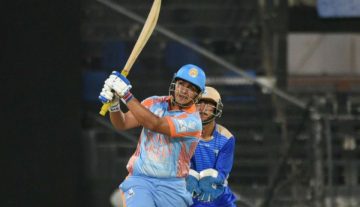 Videos
By CricShots - Oct 15, 2018
Hazratullah Zazai Smacks Six Consecutive Sixes in an Over In APL 2018