Yuvraj Singh finally returned to the first-class cricket after one-year later but failed to impress on his first opportunity where he took 29 balls to get off the mark.

In the ongoing Ranji Trophy game between Delhi and Punjab at Delhi, the 36-year-old Yuvraj Singh returned to the first-class cricket after 408 days later. He played his previous first-class game for Punjab against Vidarbha at Mohali in October 2017. Returning to the first-class game, the left-handed batsman managed to score 24 runs off 88 balls (4 fours).

Also read: Five Indian players whose IPL career may be over

Last season’s runner-up Delhi decided to bat first after winning the toss. However, they faced a huge batting collapse in the first innings after the right-arm Punjab pacer Siddarth Kaul destroyed them. While Kaul had a bowling figure of 12.5-4-32-6, Delhi was bundled out for just 107 runs. Only the lower middle-order batsmen Kunwar Bidhuri (27) and wicketkeeper Anuj Rawat (22) reached the 20-run marks in that innings.

In reply, Punjab finished the day one on 136/3 where the skipper Mandeep Singh and Yuvraj Singh remained unbeaten. While Mandeep was batting on 54 runs, Yuvraj already scored 16 runs after getting failed to open his account in first 28 balls.

On day 2, Yuvraj lost his wicket after adding just eight runs on his account as he was caught out by 24 runs. Mandeep played a 90-run knock and Gurkeerat Singh also played an important 40-run knock which helped Punjab to score 282 runs before getting bundled out and taking a 175-run lead.

At the stumps of day 2, Delhi scored 106/6. Delhi opener Gautam Gambhir, who scored only run in the first innings, played a crucial knock of 60 runs off 95 balls (6 fours and only six) before getting caught behind. Punjab pacer Siddarth Kaul has against picked up two wickets (2/35) while the left-arm spinner Vinay Choudhary took three wickets (3/23). Delhi is still trailing by 69 runs while they have just four wickets in hand. 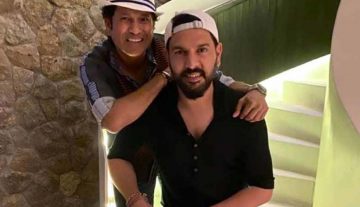