The veteran Indian all-rounder, Yuvraj Singh is still fighting to get back to the national squad but his international career for India is anything but over. However, the southpaw has often been seen posting videos or pictures, captioned with motivational quotes, signifying his love for the sports. Recently, the veteran played only five first-class matches for Punjab.

In recent times, Yuvraj didn’t have a lot of great outing as he only managed to get only a handful of runs under his belt. Moreover, he was also not entrusted with the leather. The Chandigarh-born was last seen wearing the blue jersey when the national team toured the West Indies for a limited-overs series back on June 30, 2017. With a number of players coming to the fore, Yuvraj’s comeback looks next to impossible.

Singh has some cricketing assignments in the upcoming months as he was picked up by Rohit Sharma-captained Mumbai Indians (MI) in the 12th edition of the Indian Premier League (IPL). He didn’t get picked in the first instance after which, the Mukesh Ambani-owned franchise brought him. The veteran campaigner was a part of the India-Maldives Friendship Cricket Series 2019 as well.

Yuvraj didn’t last long on the 22 yards and could only score 17 runs from six deliveries in the clash between Air India and the Maldives Cricket Team. His knock was laced with one boundary and a couple of monstrous hits one of which came off a bold reverse-sweep. The bowler came from around the wicket and churned out a full-length ball. At that point in time, India A’s score was 71 for no loss.

Yuvi got into position even before the bowler released the cherry. The bowler paused on his run-up and the left-hander got ready to play a reverse-sweep. The off-spinner couldn’t adjust his line and length, and Singh smacked the ball hard with all his might. The ball cleared the ropes with ease. 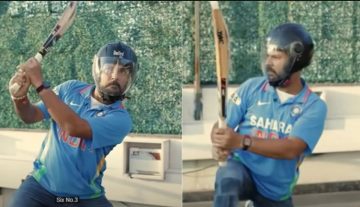