Former Indian all-rounder, Yuvraj Singh doesn’t see himself becoming a full-time coach in the future. However, he is working on the grooming of the next batch of cricketers from Punjab by giving youngsters some much-needed English lessons. The love-hate relationship between the Punjab team and the English language has never been a hidden fact. Many players from the state have spoken about how players don’t have the best command over the language.

Speaking on “22 Yarns with Gaurav Kapur”, Yuvraj Singh shared how he is helping Punjab’s youngsters be match-ready by giving them English lessons.

Describing the same, Yuvraj Singh said, “I don’t think in the long run I would like to take up coaching, because I would have a lot to do elsewhere. I would probably work with guys that I like and I will pick them. But when I do that, I spend a month or two with them. Talking to them every day, working on their game, their vocabulary etc. Working on how they will speak if they get a Man of the Match tomorrow. I make them read English.”

A few years ago on Gaurav Kapur’s show “Breakfast with Champions”, Yuvraj Singh had sarcastically said that some of the Punjab cricketers have an excellent relationship with the English language. He also revealed that then-captain Harbhajan Singh had launched a special “English Day” to help youngsters get comfortable with the language.

Elaborating the same, Yuvraj Singh said, “Our Punjab team is full of intellectual blokes. They speak such good English that those who know the language will also forget it! Harbhajan Singh, our captain, made a rule that on Sunday we have English day in the Punjab team. Whoever broke the rule and spoke in Punjabi had to give a Rs 1000 fine.”

Yuvraj Singh shared an amusing anecdote to give an insight into what goes down in the Punjab dressing room. He recalled it has always been a comical sight to see the players try to speak in English. He is not the first to open up about the Punjab team’s English struggles. 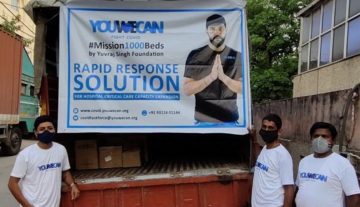