India’s limited-overs skipper, Rohit Sharma, seemed a bit annoyed because of the lackluster fielding efforts on a couple of occasions by the Indian players in the 2nd T20I of the three-match series against West Indies, was finally seen having fun after the game. The reason behind his jolly mood was ominous as the Men in Blue had pocketed another series win over the Caribbean giants after beating them in the 2nd T20I.

The task was a bit difficult this time as the Caribbean had won the toss and asked Team India to bat first. Ishan Kishan and Rohit Sharma struggled to find the rhythm and gave away their wickets. Virat Kohli played a gritty knock of 52 runs followed by a couple of quickfire knocks from Rishabh Pant and Venkatesh Iyer that helped India post a total of 186 runs in the first innings.

The bowlers had a tough job at their disposal in the 2nd innings as the dew started coming from the first over of the 2nd innings itself. However, the Indian spin twin of Yuzvendra Chahal and Ravi Bishnoi got India a couple of wickets. After the first couple of wickets, Rovman Powell and Nicholas Pooran made a solid partnership as they stitched a partnership of more than 100 runs.

However, Bhuvneshwar Kumar got India back in the game, and eventually, the Men in Blue registered an 8-run win and took an unassailable 2-0 lead in the series. In the last four balls, West Indies needed 23 runs and the equation came down to the visitors requiring 11 in the last couple of deliveries owing to the ferocious hitting of Rovamna Powell as he smashed back-to-back sixes.

ALSO READ: Virat Kohli, Rishabh Pant Have Given A Break From India’s Bio-bubble

During the course of the chase, Rovman Powell had smashed quite a few fiery blows which left most of the Indian flueless as they didn’t have the option of stopping the ball from going towards the boundary. As a result, after the match, the Indian cricketers, Yuzvendra Chahal and Ishan Kishan were seen testing the bat of Rovman Powell. 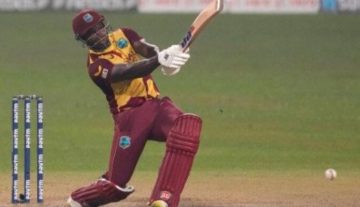