The Royal Challengers Bangalore (RCB) leg-spinner, Yuzvendra Chahal is someone, who prefers to torment batsmen with his guile and trajectory. On the back of his spin-bowling prowess, RCB hs been doing well in the ongoing Indian Premier League (IPL). However, in RCB’s previous match against the Chennai Super Kings (CSK), he himself got frightened.

In the 13th over of the RCB’s batting, they had only managed to reach a total of 69 runs in their first 12 overs at a run-rate of 5.75. The team needed a batsman to press the accelerator. And it was Washington Sundar, who started smashing the ball hard. The southpaw smashed Karn Sharma down the ground for a humongous six.

The ball was pitched outside the off-stump and Sundar got stuck into it, clearing the ropes over long-on with the utmost ease. Meanwhile, seeing the ball coming, Chahal got frightened. Taking an evasive action, he panicked and started running inside the dressing room.

Here’s the video of Chahal running back to the dressing room:

in the six matches for the RCB so far, Chahal has managed to scalp nine wickets to show for his efforts. He also had a couple of three-wicket hauls against the Sunrisers Hyderabad (SRH) and the Rajasthan Royals (RR). He has bowled at a decent economy rate of 7.78. In the previous match against the CSK, he conceded 35 runs in his four overs.

But he also got rid of MS Dhoni, the CSK skipper, at a crucial stage in the 16th over when the latter could have taken the Yellow Army through. In his spell, Chahal had conceded three fours and a six with six dot balls. Yuzvendra Chahal will be looking to continue his form in the upcoming matches for RCB as well.

As far as Saturday’s match was concerned, Virat Kohli won the Player of the Match award for scoring 90* runs off 52 balls with the help of four fours and as many sixes. He came at the crease in the third over after Deepak Chahar got rid of Aaron Finch. While defending 169, RCB restricted CSK to 132 for eight, winning by 37 runs. 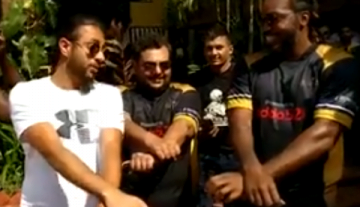