New Zealand, Pakistan, and Bangladesh are currently involved in the T20I Tri-Series 2022. As many as seven matches will be played throughout the series between the three teams. All the games will be played in Hagley Oval, Christchurch. So far, three games have been played and Pakistan is leading the charts, however, during the second T2oI between Pakistan and New Zealand, a streaker ran on to the field and disrupted the player for quite some time.

During the second game between New Zealand and Pakistan, an unexpected incident took place on the field, which stunned the cricket fraternity. A streaker invaded the turf and disturbed the run of play during the second T20I. Meanwhile, the ground officials quickly caught the naked New Zealander and arrested him on the field in first place. The video has been doing the rounds on social media channels.

Pakistan captain Babar Azam was named the man of the match for his match-winning knock. He scored 79 off 53 balls including 11 boundaries.

After the match, Babar Azam said, “We have started well in the batting, me and Rizwan planned to utilise the first six overs and also the dew. We have a plan to send him up to charge the bowlers, he played well [on Shadab at 4]. Little bit different because of the dew and the ball is coming on nicely [on the pitch]. We are playing very well and as a captain  We assessed the conditions and executed our plans, our bowlers bowled very well.’ 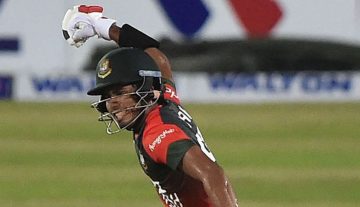