In the rain-marred warm-up encounter, Windies decided to field first after winning the toss. Before the rain came on, Afghanistan batting suffered a huge collapse as they were once 71/8. While the Windies left-arm pacer Sheldon Cottrell provided a perfect beginning for his team by dismissing Mohammad Shahzad in the very first over for a duck, other bowlers supported him very well.

After the rain-interruption, the match reduced to 35 overs. Post rain-interruption, Samiullah Shenwari and Gulbadin Naib pushed up the team’s innings with a brilliant partnership. The duo put 91-runs partnership for the 9th wicket before Naib was dismissed in the last over for 48 runs off 38 balls.

Among the Windies bowlers, Cottrell (3/43) picked up three wickets while the skipper Jason Holder (2/27) and Kesrick Williams (2/34) claimed two wickets each. Also, Kemar Roach (1/16) and Carlos Brathwaite (1/27) earned a wicket each.

Lewis and Samuels put an important 44-runs partnership for the third wicket. But once that partnership was broken, the Caribbean team suffered a major batting collapse. While once their scoreboard was looking quite well with 80/2, they were bundled out for just 110 runs in a sudden moment.

In between that massive Caribbean batting collapse, Afghanistan right-arm pacer Dawlat Zadran claimed a hat-trick by dismissing Shimron Hetmyer, Rovman Powell and Carlos Brathwaite in the three consecutive deliveries. Apart from that, Dawlat also dismissed Shai Hope as he finished with the bowling figure of 7-1-26-4.

Among the Windies batsmen, only Lewis (36) and Samuels (34) were able to post the double-digit score while the extras were 11. Windies lost the match by 29 runs in D/L method.

Leg-spinner Rashid Khan was leading the side as their skipper Asghar Stanikzai is going to miss for the initial stage of the World Cup Qualifiers due to an appendix surgery.

Zimbabwe vs Ireland: Hosts Zimbabwe failed to get a fresh start as their match against Ireland was washed out due to the rain. The match even failed to provide a toss.

Netherlands vs Hong Kong: Netherlands clinched a superb 8 wickets victory. Netherlands decided to bowl first after winning the toss. Hong Kong was bowled out for just 157 runs (41 overs) while Netherlands had a 153 runs target in 46 overs due to a D/L method for the interruption of rain. Netherlands reached the target in 35.5 overs after losing only two wickets.

Scotland vs Papua New Guinea: Scotland beat Papua New Guinea (PNG) by 7 wickets. Scotland decided to field first after winning the toss and bowled out their opponents for just 196 runs in 46.2 overs. Scotland secured their victory by reaching the target in 36.4 overs after losing only 3 wickets.

Nepal vs United Arab Emirates: In the rain-interrupted 29-overs per innings clash between the two Asian teams, Nepal secured a 5-wicket victory against United Arab Emirates (UAE). Deciding to bat first, UAE only posted a total of 171 runs before getting all out in 28.5 overs. In reply, Nepal chased down that target in 28.2 overs after losing 5 wickets.

Now, let’s see some twitter reactions on the clash between Afghanistan and Windies

Widneis played with their best possible playing XI but apart from Lewis 36 and Samuels 34 no one reached double figures pic.twitter.com/wCR0oXUgQ6

Dawlat Zadran took a hat-trick as Afghanistan came from behind to beat two-time former world champions Windies by 29 runs https://t.co/cRBquXomGM

yes. time to move on and look beyond Windies. I'm sure there are much more deserving teams like Afghanistan who will bring much more credibility to the game

Afghanistan can reach WC with ease, it'll be interesting to watch who among other reach finals of Qualifiers WINDIES IRELAND SCOTLAND NEPAL NETHERLANDS UAE are contenders & PNG don't stand in their league

Windies loose to @ACBofficials in the warm up game.. what a downfall it has been and worst part is there seems to be no solution to their state of affairs. I'm sure they wont qualify, backing Afghanistan and @ZimCricketv to go through, they are certainly more deserving

In this form we might not see the two time World champions in 2019. Windies loses the warm-up game against Afghanistan #WCQ2018

West Indies all out for 110 chasing 169 against Afghanistan..

This is not the Windies we wanna see

Thank God that this #AFGvWI match is a warm-up! #Windies have their work cut out in this tournament.#CWCQ #cricket #CWCQ18 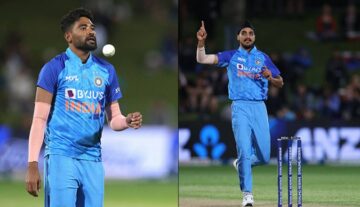