Videos
Ajinkya Rahane Was Caught Reminding Himself To Watch The Ball In Centurion
By CricShots - Dec 27, 2021 12:04 pm
Views 1.6K

The veteran Indian batter, Ajinkya Rahane seems to be desperate to score runs in the ongoing Boxing Day Test in Centurion against South Africa. In a video going viral on social media, Rahane can be seen reminding himself to “watch the ball” after he walked in to bat following the dismissal of Virat Kohli in the final session of the first day’s play. Rahane has been witnessing a rough patch so far in 021, averaging a poor 19.57 in 21 innings.

However, Ajinkya Rahane scored his last three-figure mark in December 2020 against Australia at the Melbourne Cricket Ground (MCG), the venue of the second Border-Gavaskar Trophy Test. He received a setback not too long ago when the BCCI and senior men’s team selectors decided to appoint Rohit Sharma as the deputy skipper in Tests.

Ajinkya Rahane has been struggling with his form for a while now and often his place in the team has been questioned also because of the depth of the Indian team, which has plenty of able players warming the bench. It was not entirely surprising to see him consciously reminding himself to keep an eye on the ball against South Africa, as another below-par series could well result in him getting out of contention from the Test squad.

Here is the video of the game:

Rahane reminding himself to watch the ball as the bowler runs up makes me realise how cruel cricket can be for such experienced guy pic.twitter.com/3HKhVgMMFc

Notably, in Centurion, India decided not to include either Shreyas Iyer or Hanuma Vihari in the XI. Iyer made his case strong as early as his debut Test, with scores 105 and 65 against New Zealand in Mumbai, but could not make the cut, whereas Vihari, who was unarguably more acclimatized than any of the other Indian batters – he had registered scores of 25, 54, 72 not out, 63 and 13 not out in the three unofficial Tests in Bloemfontein against South Africa A – was not included either.

While Ajinkya Rahane has struggled for runs, he has had constant backing from the management, including KL Rahul, who is currently donning the vice-captaincy hat after Rohit’s ruling-out injury in the lead-up to the series.

During a recent media interaction, Rahul said, “Ajinkya has been a very important part of our Test team and has played very, very crucial knocks in his career. The last 15-18 months, if I can think back, his knock in Melbourne was really really crucial; it helped us win a Test match. That partnership with [Cheteshwar] Pujara at Lord’s in the second innings where he got a fifty was really important, and that ended up in us winning the Test match. So he’s been a key player for us in the middle order.” 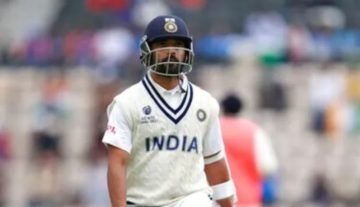