Following Pakistan’s win in the do-or-die clash against Sri Lanka in the ICC Champions Trophy, captain Sarfraz Ahmed has credited the victory to their front-line pacer Mohammad Amir and his temperament with the bat.

In pursuit of Sri Lankan’s 236, Pakistan were 7-162 against Sri Lanka when Amir joined captain Sarfraz in the middle on Monday. Amir scored 28 not out as he maintained his calm to help his side cross the 200-run mark, forming a 75-run crucial unbeaten partnership with Sarfraz.

Sarfraz revealed the key conversation he had with Amir in between the wickets that helped the bowler keep his nerves.

“I was thinking that if I play 50 overs, we would win,” he explained. “Credit goes to Amir, he played really well. I just told him to play ball by ball. ‘Don’t look up, don’t look at the scoreboard’. I told him to just play his game. We just played our normal games,” he said.

Sarfraz also admitted to having felt the pressure when all-rounder Imad Wasim got out on four runs, leaving Pakistan at 6-137.

“When Imad Wasim got out, I felt the pressure. He can bat and bowl, he is a good batsman and we were confident when he was there. But hats off to Amir… The way he played was outstanding,” conceded Sarfraz.

“When we had 40 to win, I was feeling the pressure but Amir was calm. We just played our natural games. Yes, we were lucky with dropped catches but we held our calm.” 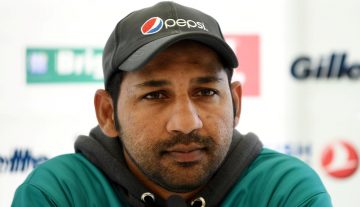